I am a fully qualified personal trainer at Fitness First Newtown. I specialise in body sculpting, bodybuilding, weight-loss and muscle gain.

I have been a competing bodybuilder for 10 years, as an athlete I have had the privilege to be trained by numerous top bodybuilders and strength coaches in Australia. Before becoming a personal trainer I completed my 6 year service time in the Australian defence force, learning the roles of leadership, quality control, discipline and team work.

Raymond Neto is a bodybuilder and a leading personal trainer at Fitness First Newtown. After 6 years of military service he made a commitment that when he returned to civilian life he would pursue his life long dream of being a professional bodybuilder.

Me at basic training performing the physical training requirement, which had to be conducted each day. No bodybuilding for 11 weeks

Raymond began his career in bodybuilding at the age of 18 and weighing only 61 kg, adamant that group sports wasn’t his forte he opted to build a physique much like his idols Dorian Yates and Arnold Schwarzenegger that he admired with immense passion.

After competing in the ANB south coast titles (2004) at the age of 19 weighing 72 kg and being coached into condition by former friend and Australasian 2nd place competitor (Mike), he achieved 2nd place in under-22s and 3rd place in men’s opens.

2nd/3rd at aged 19 at the South Coast Titles ANB

For the next few years to follow Raymond found himself leaping from apprenticeship to apprenticeship in search of the right career. Not to mention his first application into the defense at age 19 was met with a cruel realization that had haunted him since age 12, he was denied entry due to being diagnosed with cystic acne. A man passionate to overcome obstacles he reapplied for the military, and after several months of medical treatment he entered age 21, 2006. Raymond’s passion for the sport of bodybuilding never vanished even when consumed with hours of military fitness, drills and specific military courses he always found time to set programs/read fitness specific books and develop his body. Actually Raymond had so much commitment to bodybuilding that even during the intensive basic training he would use anything and I mean anything to train with, unorthodox as this sounds take for example a double bed/towel or even a training partner can be used as resistance. After 1 year of specific trade skill development in the navy, Raymond found himself again in desperate need to compete. So at age 22, 2007 he competed in the Australian defense force titles Cerberus, whilst achieving the best posing routine he placed 3rd in men’s class overall.

Raymond completed his service on his naval ship (HMAS MANOORA) in 2011, after 4 years of service on a small gym he once again wanted to compete whilst in the defense. With only 5 months preparation time Raymond competed in the INBA Sydney titles, with a poor standing of 6th place he held off competing to complete his remaining year of service. Once his contract of 6 years was complete, Raymond now sought to follow his desired profession of personal training and professional bodybuilder. At age 28, 2013 he won his first 2 divisions 1st in men’s intermediate and 1st in Men’s height class 3 at the INBA Brisbane physique Titles.

Raymond has completed several modeling campaigns for athletic wear and men’s formal wear. He is featured on a Australian website known as Build my body as an ambassador and bodybuilding Icon, gained supplement sponsorship with GNC franchises and conducted photo shoots for many brands/events and products from the vanguard/ Exile/ Training E-books/ Stardust / and BMB. Aside from the sport and lifestyle of bodybuilding, Raymond enjoys motorbike riding, dining out , traveling internationally both dining and exploring the sites of a new city . Raymond’s has several goals one being his Quest to number 1 to be Mr Australia with in a 3 year time frame, his self help book “Overpowering the negative mind” and the development of his My Evolution training system. 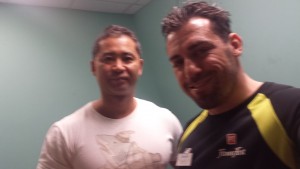 Having played a variety competitive sports for most of my life and trained with a wide range of coaches, when I train with a gym PT now I expect to deal with someone that delivers on a holistic level. My expectations for a PT would be for that individual to not only have an advanced level of knowledge in most forms of training but also traits that display adaptability, intelligence, maturity, empathy, motivation, and non judgemental positivity. Ray delivers on all these and then some. He obviously looks the part, but this was not the sole reason I initially approached Ray to be my PT. On several occassions I watched him go through his own workouts and it was evident that he pays very careful attention to correct technique and focus. This guy is not just about throwing around the heaviest weights and machismo, in fact a lot of his own workouts do not involve big weights at all. His interactions with other clients are always professional and guided and with just the right level of measured challenge, depending on the person. They all walk (sometimes limp) away satisfied.

Ray has provided custom programs for me that have produced the results that I am seeking. He has introduced regimes that are new to me, explained the intricacies of the planning of the programs specifically designed for me, my goals and body type. This has rejuvenated my interest in training and provided new challenges that keep me coming back for more. Although my work committments dont always allow for regular sessions, sticking to the programs he has provided has helped me achieve extra strength, endurance and the body shape I desire. Outside of designated session times, if Ray is around he is always approachable and listens to any questions that I may have in regards to training.

Going forward I have personal goals of competing in amateur power lifting competitions, despite my age! I have full confidence in Ray being able to guide me towards pushing me to realise achievements beyond my own expectations. In return I can only pay back the favour when I spot him through 100 bench press reps and see him go on to be INBA champion of Australia!

Having served in the Royal Australian Navy for 6 years and been a bodybuilder for 8 years, Raymond Neto knows what it means to be constantly challenged – it takes effort and discipline, setting goals and working towards them everyday.

Ray’s personal experiences – being bullied as a youngster and inspired by his mum battling cancer – have taught him that there’s more to goal-setting than that. It’s about overpowering the negative mind to develop positive thought-processes and behaviours – to genuinely care about yourself ‘give yourself a break!’ as well as others.

That’s why Ray brings to his personal training style a unique mix of discipline and empathy. Personal training with Ray is about understanding your goals and your individual needs to develop a personalised program that steps you towards your goals with the utmost care and precision.

During your personal training session, Ray regularly changes and increases the difficulty of the workout to keep the body and mind challenged, whilst ensuring technical efficacy. He checks your progress against your goals and monitors your statistics. What his clients really appreciate is his welcoming ‘what’s your mood today?’ and the way he adapts their workout for that day.

Over many years of providing advice, assistance and support to clients, friends, Navy peers and bosses and fellow body builders, Ray developed his MyEvolution training system to facilitate goal setting and monitoring, enabling flexibility for individuals’ goals, personal and everyday needs – giving people the autonomy to train themselves and track their own progress whilst ensuring consistency and quality of outcomes.

MyEvolution training system gives every client a roadmap to their success. There are over 360 micro-programs that Ray tailors to individuals’ specific goals and needs including 3 tiers of beginner, intermediate and advanced across 10 different specialisms – strength and conditioning, weight loss, hypertrophy – each with 3 tiers and 4 weeks within them. So you’re constantly challenged and changing, progressing and achieving small goals towards your big goal.

Request more information on Ray’s personal training and coaching and the My evolution system by clicking the below 2 links :